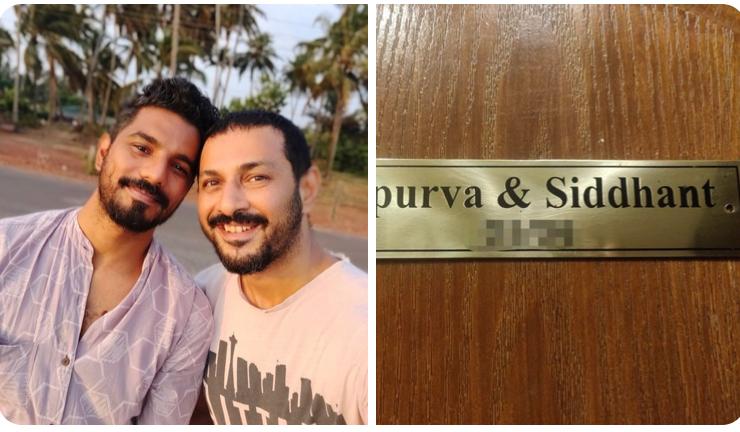 Gay, proud owner of own house and no more hiding

Gay couple had to pretend to be cousins, were asked to keep their relationship behind curtains. Finally they have their own home and also their freedom.

This gay couple had to hide their relationship behind the curtains. To rent a home they had to pretend to be cousins.

Finally they got their freedom, when they owned their own house and let the truth about their love blossom.

Apurva Asrani, a national award film maker took to twitter to announce his new home purchase along with his same sex partner.

His tweet read, “For 13 years we pretended to be cousins so we could rent a home together. We were told ‘keep curtains drawn so neighbors don’t know ‘what’ you are’. We recently bought our own home. Now we voluntarily tell neighbors we are partners. It’s time LGBTQ families are normalised too.”

Discrimination when it comes to renting an apartment or buying a house does exist in the country.

There are many housing societies that do not give homes on rent to gay couples, singles, widow or a single woman.

These discriminations have been normalized by many, which is a matter for worry. In spite of the Supreme Court reading down section 377 and decriminalizing sex amongst two consenting adults of same sex.

There are many who still consider gay sex a taboo and gay couples aren’t seen as normal human beings.

People with different sexuality face a lot of obstacles in the society.

Trans and even gay, lesbian individuals face a lot of discrimination when they try to rent out a flat in Mumbai. The city which is said to be more accepting has forced many members from trans community to stay in bad accommodation, because good ones aren’t accepting them.

When Apruva tweeted about his home and how he and his partner do not have to hide their relationship any more, They also encountered a lot of hate on twitter.

For example one person called it a sin.

Some even used abusive language and some even wondered how can people wish Apruva.

While there was hate, at the same time, there were many who congratulated the couple and asked them to ignore the unwanted hate comments.

However, things are changing for the good. Even office accommodation are being allotted to employees with same sex partners.

Earlier this year, Koninika Roy who identifies herself as a Bisexual moved with her partner Shruti Kulkarni in the office accommodation on the day, when Mumbai’s LGBT community celebrated the pride parade.

The society is changing, there are many who are still into hiding, but many have come out of the closet.

Acceptance of all is what will make the home called world a better place to live. There are many who will can relate to Apruva’s story. For many this will also work as a goalpost to achieve their dream.

Also Read: Office Accommodation For She & Her Girlfriend.